Development of the Russian valve engineering for energy, same as that of any other sector or subsector of engineering, depends, on the one hand, on the condition of the industry that is the primary user of its products (in this case, nuclear and conventional energy), quantitative and qualitative goals pursued by the energy industry and, on the other hand, on the condition of businesses (manufacturing companies, design companies, testing facilities) involved in the manufacture of valves for the energy industry.

Analysis of the state of electric energy industry in Russia

The long-term development of the electric energy industry in the Russian Federation is guided by the Master Plan of Energy Projects 2020.

The dominance of thermal energy is a traditional and economically justified development pattern of the Russian energy sector.

Currently, the total installed capacity of cogeneration units is 154,700 MW.

According to the Roadmap of the Russian Thermal Energy Industry, 34,440 MW of new generation capacity will be commissioned in 2011 – 2017.

Given that about 50% of the generating capacity in the thermal energy industry require either replacement or retrofitting and upgrading due to obsolescence, it is reasonable to expect stable or moderately rising demand for valves for thermal power plants in the mid-term till 2020.

Table 1. Analysis of reliance on imports of key generating equipment in the construction and upgrades (reconstruction) of thermal power plants*

* – Analysis performed based on current data of OGK and TGK for completed and current investment projects involving commissioning of 90 new and upgraded (reconstructed) TPP units in 2010-2017Analysis is an estimate.

All these features have an impact on the current requirements to the valve market for thermal power plants:

Expert assessment of the average annual market demand for valves of the Russian thermal energy industry is RUB 12 bn.

Today, 33 units at 10 nuclear power plants are operated in Russia.Roadmap of construction of new units in the medium term provides for commissioning of additional 8 units.

Analysis of the implementation of FTP and roadmap shows that the actual annual demand for power engineering valves for new NPP projects is one complete unit VVER-1000/1200, which in real terms is about 27,697 pieces of equipment (using as an example Unit 3 of Rostov NPP (VVER-1000 design V-320)).

In our opinion, the value for money relationship is currently dominated by price at the minimum required level of quality.This factor leads to the fact that valve manufacturers have almost stopped investing resources in product development, which in turn makes Russian products less competitive in the construction of nuclear power plants abroad and creates the preconditions for increasing the share of imports in the construction of nuclear power plants in Russia. For example, in the construction of Units 1 and 2 at Tianwan NPP in China, the degree of the customer’s distrust in the possibility of procuring special valves from Russia was less than 10% (estimate by Atomenergoproekt, St. Petersburg), but in the construction of Units 3 and 4 of the same NPP, the customer’s distrust (in other words, localization) rose to 50% of the total scope of supply of valves.Only two companies – Mechanical Engineering Corporation Splav, Veliky Novgorod, and CKBA, Kiev, were approved by the Chinese customer to enter into direct contracts for the supply of valves for the new units of Tianwan NPP.

Table 3.Changes in the composition of manufacturers of valves for Tianwan NPP, China

The degree of localization in the future contract for the construction of Phase 2 of Kudan-Kulam NPP in India is 30% of the combined equipment; it is highly likely that in respect of pipe valves this figure can rise to 60%.Although it should be noted that there are no fundamental design differences between Phase 1 (Units 1 and 2) and Phase 2 (Units 3 and 4) of Kudan-Kulam NPP, preferences of manufacturers in installation, testing and operation of Phase 1, availability in India of own valve manufacturers are likely to lead to a 2 times reduction in the supplies of Russian valves and fittings.

Besides, there is another negative factor for Russian valve manufacturers: nuclear power plants in Kaliningrad Region and in Turkey (VVER-TOI design) will use turbines by Alstom, which means that classified valves for the turbine hall will be manufactured outside Russia (in France, Germany , Canada, Spain, Czech Republic).That is, there is a tendency of procuring imported valves for Russian projects.What this leads to is clearly illustrated by Phase 2 of Tianwan NPP; in thermal energy, the share of imported valves is up to 55% in the construction of new units in Russia

In the development of the evolutionary VVER-TOI project, there was an engineering trend directly related to power engineering valves.It was the use in piping systems (pipes + valves), instead of carbon steel grades, pearlite and martensitic steel grades with high yield point at 250˚C and high corrosion resistance.

In recent years, in the operation of nuclear power plants the transition from routine maintenance of equipment to operation and maintenance of equipment based on its actual condition has become relevant.For valves, primarily those with electric drives, as the most representative of class of equipment, this problem is reflected in additional requirements to diagnostic equipment, development of diagnostic parameters and processing methods.Given that this is a global trend, valve manufacturers also need to reconsider their attitude to this problem in the design, manufacture, testing of their products and the development of special methods.

Based on the findings of market research conducted by the Central Scientific Research Design Institute for Modern Technologies in the Valve Engineering Industry in cooperation with the Research and Industry Association of Valve Manufacturers, average annual market demand for valves for nuclear power plants in Russia (incl. demand for spare parts) is estimated at RUB 3.7 bn.

Analysis of the valve market for power engineering

As mentioned at the beginning of this report, valve market development depends on the state of the demand industry (power generation) and of the supply industry (mechanical engineering).It would be incorrect to apply strictly sectoral analysis to valve manufacturers (manufacturers of valves for nuclear power plants and thermal power plants), since the majority of companies are diversified in terms of markets (nuclear and thermal power, oil, gas, petrochemical, and other applications) and functional purpose of valves.In addition, the majority of businesses are part of holding companies – both diversified and non-diversified, which also prevents the principle of sectoral analysis from being fully applied.

It is proposed to carry out a comparative analysis of the two groups of companies, both Russian and foreign, operating on the Russian market of consumption and production, by the criterion of export potential as integral index of competitiveness.

One of the main criteria of efficiency of the company, its competitiveness, is its export potential, that is, the set of available resources and opportunities for the production of competitive products, their sales and maintenance in foreign markets, both in the short and long term.Unfortunately, we have to acknowledge that the export potential of Russian companies is vanishing.

In nuclear power, because of the tendency of localization of production in the countries of Russian exports, this figure has decreased almost 2 times.In addition,it should be noted that this is not purely export potential of Russian valve manufacturers, but the potential of the Russian nuclear project as a whole.

The analytical review “Russian valve engineering in 2013”, prepared by the Research and Industry Association of Valve Manufacturers, shows the dynamics of imports and exports of pipe valves in general.

Figure 2.Dynamics of imports and exports of pipe valves in Russia 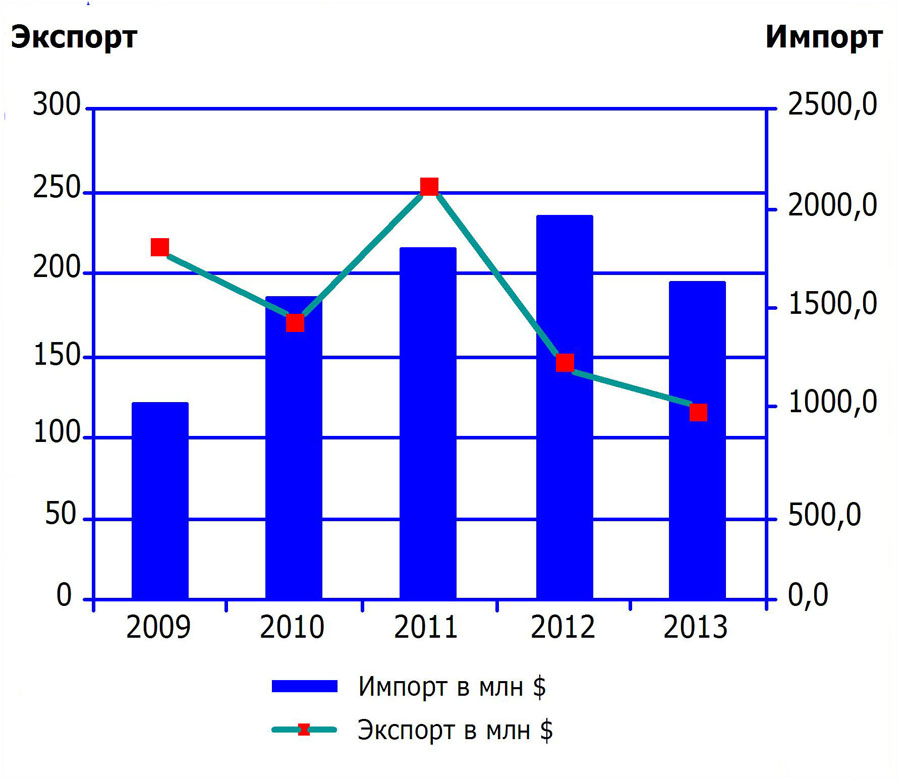 From the above chart it follows that Russian valve industry is losing its market position both in Russia and in other countries.Imports of valves in absolute terms exceed exports by more than 10 times.In the energy sector, this ratio looks certainly more optimistic, especially in nuclear power (here the ratio is close to 1:1).However, in new projects in thermal energy imports exceed exports by more than 15 times.

Why is this happening?What can be done?Answers to these questions are not simple and involve many factors, but we will try to analyze some obvious reasons for the dynamics of this lag.

The answer to the question “who is to blame?” is to a large extent – “we ourselves” (and not the reasons mentioned above).

What can be done?

We need to do same things that our competitors do, but on a larger scale and at a higher rate, because they are already in a more advanced position:

– development of a methodological program for implementation of basic international standards in energy (if necessary, an ad hoc group should be established under Research and Industry Association of Valve Manufacturers another industry organization);

– development and lobbying of import substitution program for the new generation of high-temperature, erosion and corrosion resistant steels in the form of actual semi-finished products, castings and forgings for piping systems and valves followed by commercialization at modern steel plants;

– development and lobbying of the program to create a modern valve test center.

To summarize, we would like to emphasize once again that the market of power engineering valves in Russia has strong growth prospects, but in order to have dominant position on this market and to become real markets participants in other countries, it is necessary to reverse the negative trend in the Russian valve industry.